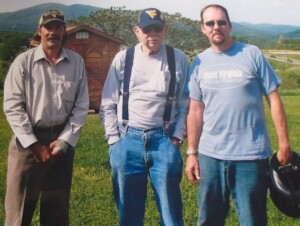 Born September 6, 1958 in Welch, WV. He was the son of the late Richard and Mary Ellen (Toler) Ellis.

In addition to his parents, he was preceded in death by his brother, Stephen Douglas Ellis.

Larry attended Gilbert High School, graduating in 1976. Larry started his lifelong career with automobiles soon after high school working in a body shop owned by C.A. Hatfield in Gilbert and then for both local car dealerships in the Gilbert area, Meade Chevrolet and Cline Ford (formerly Peak Ford). Larry’s hobbies were camping, fishing, hunting and you guessed it, racing! Larry’s passion was automobiles with speed! He built and drag raced a Camaro for a few years before deciding to build race cars for local race car owners Mark Hatfield, Lucky Compton, and Tyler Blankenship.

While working with Lucky he got involved with NASCAR and impressed many racing legends in the industry.

In accordance with his final wishes, his remains will be cremated.

A memorial race in his honor will be held at a later date.

He may be gone from our sight, but never from our hearts.

To send flowers to the family or plant a tree in memory of Larry Neal Ellis, please visit our floral store.

You can still show your support by sending flowers directly to the family, or by planting a memorial tree in the memory of Larry Neal Ellis
Share a memory
© 2021 Mounts Funeral Home Inc.. All Rights Reserved. Funeral Home website by CFS & TA | Terms of Use | Privacy Policy